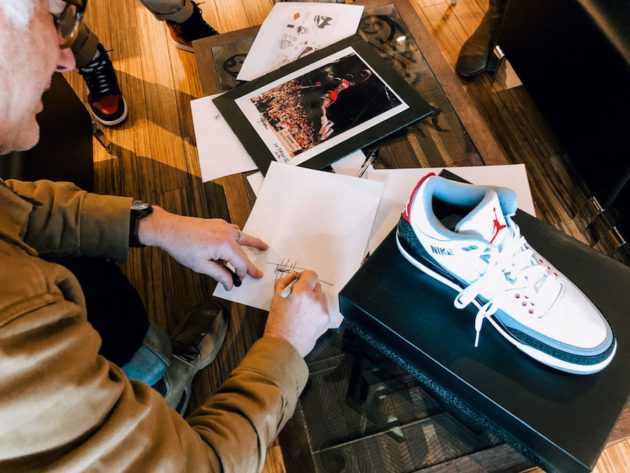 History of the Air Jordan 3. 1987-1988 was an outstanding year for Michael Jordan performance wise. Mj won the Slam Dunk contest, All Star MVP, All-Defensive First Team and Defensive Player of the Year. Through all this success, he was wearing the Air Jordan 3.

History Of The Air Jordan 3 – The Designers

Peter Moore (which designed the Air Jordan I and helped on the II) was let go from Nike, as well as Bruce Kilgore. When they had left, Peter and Bruce were trying to convince Michael to leave Nike with them, good thing MJ said no.

Now Nike needed a new designer to make the Air Jordan III. So they went to world famous Tinker Hatfield. His name is known mainly for designing Air Jordan III-XV, and also making a return on the AJ XXs, but Tinker also designed some really nice Nike’s as well. Tinker and Michael worked hard, talked to each other on what were good ideas, and what could “work”. Michael wanted a lightweight shoe, with a lot of durability. So with the Air Jordan 3 they both decided to make them a Mid top, the first mid top to be seen in the Air Jordan line. On the AJ III model Tinker placed the famous jumpman logo on the back of the shoe, and adding in a “elephant print” on the toe box. Also the IIIs were the first AJ to have a visible air-sole unit.

The inspirations for the AJ III are AJ I and II, the free throw dunk, an elephant, and last, but not least Michael Jordan. Nike’s selling strategy was simple, and great, they had MJ and Mars Blackmon (Spike Lee). After watching these funny commercials you had to go out and buy yourself a pair.

How The Air Jordan 3 Saved Nike